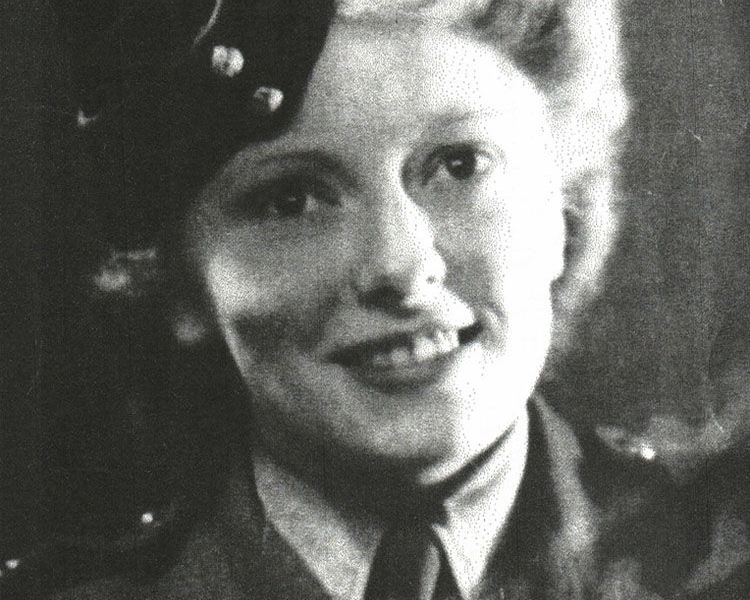 As published by Jim Claborn in the Citizen Tribune, 21 April 2019

“The tea here is so watery,” said the personable Renee Dubois. She should know. The English lady and former World War II soldier has been around many cups of tea during the 95 years of her life.

She explained how to make a proper cup of tea.

“Get your water up to a heavy boil in a pot. My son, Chris Dubois, who now lives in Jonesborough, gets good English tea for me, either PG Tips or Yorkshire. You can use Earl Gray tea if you can’t find the English brands. I use at least three bags in a teapot for two people. Pour the boiling water into a tea pot and cover the pot with a ‘cozy’ (a folded towel should work). Let it brew for five to 10 minutes. The hotter the better. Then add your sugar cubes and milk as desired.”

We were at Renee’s Regency Retirement Village apartment in Morristown where I enjoyed her tasty tea, only to be compared to that of Audrey Vick, another English lady with whom I’ve visited. As we had our tea, Renee shared her story of being in the British military during World War II.

Born November 1923, at Bolton in Lancaster County near Manchester, England, Renee was the daughter of John and Anne Taylor Agma, and a sibling to three brothers. Her father’s heritage goes back a millennia to the Viking invaders of Great Britain. Renee’s parents ran a British pub in a tradition which dated back to her grandfather, who had done quite well in the business. Being a pub operator required both parents to be at work every day, which led to Renee and her brothers to being raised by a nanny.

“We had a nanny because our parents were busy in the hotel trade,” Renee recalled. “She was marvelous and lived to be 96 years old.”

During her younger years, Renee was active in aerobic dancing, a talent which served her well. On her wall is a frame full of her dancing photos.

“You had to be in the neighborhood of the school,” she said. “There was a four-year-old ‘babies’ class. There was no home schooling. When you were 11 years old you had to take a high school test to get in. I heard that only about half passed it. I had sickness during that test, but when I was 13, I took a test for technical college and passed. Then I moved to Bolton Technical College where I studied shorthand, history and a lot of other subjects. They had started the war when I was ready to graduate and they shortened the course from three years to two.”

“I was a stenographer at William Wadsworth and Sons Company and was steady and fast. I’d already heard that I would be called to the service when I was 18. They were taking women from 18 to 25. You could join the Army, Navy, or Air Force, but there was nothing left but the Army. I had wanted to think what uniforms looked good, but the Army was short of everything and we were happy to have what we got. I was about 5’ 1” and used to stand real tall, but when they measured me they put me at 4 feet, 11 and three-quarters. When I told the sergeant that I was taller, she told me that I was in the Army and no back talk.”

Entering the army on March 20, 1942, Renee was sent to three weeks of training near Marcum Beach, where she was first be stationed.

“I was an aerobic dancer for many years and they thought that I’d be a good physical training instructor. I did that and steno. Then I got stationed right in the middle of London. We didn’t go to bed at night and would spend the nights underground. I was often on duty on top of roofs with two other girls. The Germans would drop incendiary bombs and we’d take fire extinguishers to flush fires out. That was the hardest job I had. They had anti-aircraft guns at Hyde Park and would bring down plane after plane so fast that few got past London, then Hitler brought out buzz bombs. We’d rather see planes come over because the buzz bombs killed a lot more. They would stop in mid-air and go down. He was a devil, that Hitler.

“The first year there were no Americans, then they got the 12 best of us and sent us to Eisenhower’s headquarters. They kept moving around until he and Churchhill took a place in the Bushy Park edge of London near Hampton Court at SHQAEF (Supreme Headquarters Allied Expedition Forces) and I got stationed there permanently. I took dictation from anyone. WACs (U.S. Women’s Army Corps) were with us. U.S. girls were good stenos, but the language was a little too difficult because we used language and words differently. Churchhill and Eisenhower were very careful to use the right people in the right way and I took steno from anyone and worked with lieutenants up to generals. I saw Eisenhower a lot and remember Churchill coming out of his office, tipping his hat to us and saying ‘Hello, ladies. You’re doing a great job. Thank you.’

“I saw Clark Gable and David Niven and some other actors, and danced every week with Glen Miller’s band. I danced a lot, but couldn’t dance with everyone. The night he died he shook hands with every one of us and I remember him saying ‘I’ve enjoyed it all.’ That night back at camp we heard that he’d got shot down. People were crying and very upset. We later found out that he’d been shot down by our own guns.

“Donald Dubois worked for the headquarters and all the WACs were after him. An American girl said that he wanted to know my name and I said ‘Who cares?’ She introduced me to him and our first date was to London with eight American boys and eight British girls. We courted at SHQAEF for about a year. Don was from Kingston in upstate New York near the Catskills. We knew we were going to France on June 6, 1944 and got married two days before that. SHQAEF was going into France and we found out that married couples weren’t allowed to be going. He left with the force and went through Europe, and I didn’t see him for two years. I was making 15 shillings a month when I went in the Army as a private and came out as a corporal. My grandfather had a large greenhouse and had to sell his crops to the government. We ate better than civilians and worried how they were doing at home.

“My parents liked Don and were really good about it. I landed here on the Queen Mary on the first week of May 1946. Don was from farm country and my in-laws were country bumpkins in the Grahamsville, New York farm country who tapped maple trees and had 20 head of cattle and milking machines. I couldn’t go to church because my clothes hadn’t come and I only had my uniform. I wasn’t used to their food. They took me to a church pancake supper and their pancakes were very different from ours. When Don arrived I found that they planned on him coming home and taking care of them, and I pulled a fast one.

“I knew that I had to find a job and we had to buy a house. I got a job before he did. It was in Ellenville 22 miles away, where we would build a house in 1950. Don got us a car from an older man and he would take me to work. Don had four years of college. Banks had openings and he got a job as for a bookkeeper and was a good banker. We had that Model T before we got the money together for a Chevy. Our son Chris was born in 1949 and that’s when I became a citizen. Chris became a lawyer for an insurance company.”

Don passed away in 1981 on Renee’s birthday and she later remarried a second husband who passed away in 2015. Her last job was as a stenographer at a state prison in Ellensville, New York.

“I’ve always loved to dance, but because of my knees I would fall down and came here in 2015” she ended. “I love it here at Regency and have Dorothy Vick and other friends. It took me a while to get used to it and I think that being in the Army helped. My mother has got to come to the U.S., but my father couldn’t come. You can very seldom leave a pub and he’d have had to get a manager. Pub keepers can’t be drinkers. I’ve been back to England 15 times to see my family and I still talk to my nephew Phil in England over Skype every day.”